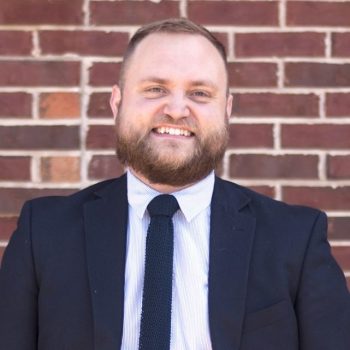 Ryan was born and raised in Eastern Pennsylvania in a theologically liberal church. The Lord redeemed Ryan in 2008 when he was 17 years old. He felt a call to go into ministry a short time later. He attended Lancaster Bible College in Pennsylvania and after graduation worked at the campus coffee shop where he met his wife, Stacey. Two days after their honeymoon, they moved to St. Louis so Ryan could pursue his Masters of Divinity at Covenant Theological Seminary. Two years later, he was hired as the Youth Ministry Director at Center Grove Presbyterian Church. After graduation in December 2019, he was called to be the Assistant Pastor of Youth and Young Adults at Center Grove. He was ordained in October 2020. He was then called to be the Associate Pastor at Center Grove in November 2021.

When not involved in church ministry, Ryan loves to play drums, play ping pong, cook, follow the Philadelphia Eagles/Phillies, and spend time with his wife visiting the local farmer’s market, walking around downtown Edwardsville, and going out to eat.